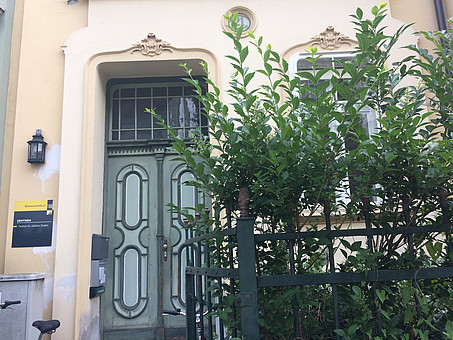 The Center of Jewish Studies (abbrev. CJS) was founded in 2000 under the name "David-Herzog-Centrum für Jüdische Studien" and renamed to Center for Jewish Studies a year later. The CJS sees itself as a historical, literary and cultural research institution. Since its founding, it was initially funded by the Verein zur Förderung des Centrums für Jüdische Studien (Association for the Promotion of the Center of Jewish Studies). In 2006, the CJS was re-established as an interdisciplinary research center of the University of Graz, which also expanded its tasks and goals. In addition to scientific research, the CJS established its own inter-university joint master’s degree program. In 2014, the CJS was organizationally integrated into the Faculty of Arts and Humanities of the University of Graz.

Research and teaching at the CJS deals with Jewish history, Jewish literatures and cultures since the Age of Emancipation – taking into account the diverse forms of interaction between Jews and non-Jews. The CJS academic staff pursues theory-led research approaches as well as the premises of critical historical and cultural studies. Spatially, research interests at the CJS primarily focus on Central Europe together with its eastern and south-eastern bordering regions, whereby a higher priority will be given to the university research focus on Southeast Europe in the future.

The fields of activity largely include research based on third-party funding as well as university teaching within the framework of the Joint Master’s Degree Program Jewish Studies – History of the Cultures of the Jews, organized by the CJS together with the Hochschule für Jüdische Studien in Heidelberg. The CJS actively participates in current international research discussions and regularly organizes international workshops, symposia and conferences. Furthermore, the Center publishes the book series Schriften des Centrums für Jüdische Studien (published by Böhlau publishing house) and the lecture series Vorlesungen des Centrums für Jüdische Studien (published by Clio publishing house).

The CJS is well connected with research institutions within the University of Graz and beyond it and has established strong connections in research and teaching nationally and internationally.

Aware of the social and societal relevance of the topics dealt with by the CJS, its scholars take part in the transfer of “science to public” and “science to professionals” through public events and various cooperations with institutions in the educational and cultural realms.